We may earn commission from links on this page, but we only recommend products we believe in. Pricing and availability are subject to change.

The new mesh router from Google, Nest WiFi Pro, launched back in October and is just now seeing its first discount. If you've been thinking about stepping up to the newly opened 6GHz WiFi band or are curious to see how Google's new smart home industry standard, Matter, will operate once it launches, this might be the time to add the routers to your cart.

You'll get the best deal with the two-pack, which is 17 percent off, making it $250 for the set. The three-pack and the single unit are both 15 percent off, bringing them down to $340 and $170, respectively. We're seeing discounts for all three packs at Amazon, but you can also head over to Wellbots and snag the three-pack for the same $340. 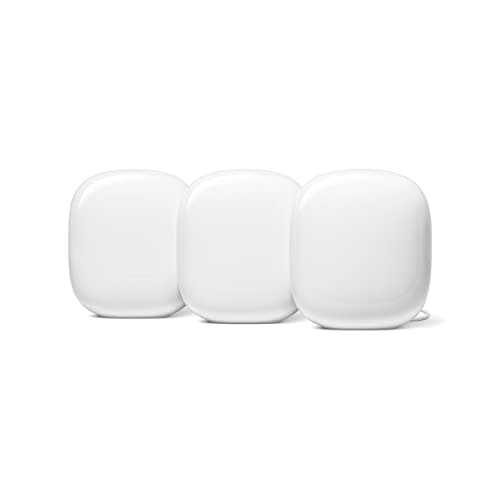 This set of reliable mesh routers tap into the newly available and less crowded WiFi 6E standard.
$340 at Amazon

Google currently makes three different routers, Google WiFi, Nest WiFi and the new Nest WiFi Pro, which has a shiny new design and is the only one running WiFi 6E. If you're curious what that means, in a nutshell, in 2020 the FCC opened up more airwaves in the 6Ghz band for WiFi to run on, which allows your home WiFi to get better wireless connections with less congestion.

Google states that WiFi 6E will be up to twice as fast as the previous WiFi 6 standard. Of course, only devices that are WiFi 6E compatible will be able to access the new airwaves. But since these routers are tri-band, they also provide access to the 2.4 GHz, 5 GHz and 6 GHz frequency bands, meaning any device that currently runs on your WiFi will also run on these routers. Also keep in mind that these don't replace your modem, one router plugs into your ISP's modem or gateway (a combined modem router).

A single Nest WiFi Pro unit will extend coverage to a home up to 2,200 square feet. With three routers, you'll get up to 6,600 square feet of coverage. The routers are also ready to act as a hub that will work with Matter, Google's forthcoming smart home industry standard that's intended to bring more universal connectivity (as in, working with Apple, Samsung and Amazon devices) to the smart home landscape. It'll also make new smart home devices easier to set up and use. Matter is scheduled for this Fall and these Nest WiFi Pro routers will be ready when the service launches.